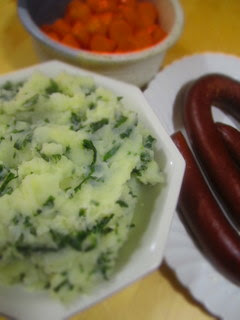 I don't think I need to tell you how much I love kale. Kale chips, kale soup, and kale salad all make their way onto our dinner plates often. I continually search for new ways to use kale, and recently found this Irish recipe for Colcannon.

Irish tradition dictates that this mashed potato dish is served with cabbage or kale and butter. There is even a traditional Irish folk song that extols the virtues of this lowly peasant dish.

Did you ever eat Colcannon, made from lovely pickled cream?
With the greens and scallions mingled like a picture in a dream.

Did you ever make a hole on top to hold the melting flake
Of the creamy, flavoured butter that your mother used to make?

I basically stuck with tradition on this one, my only addition being garlic. Now I can't imagine this recipe without it.

Apparently there is a very similar Dutch recipe with potatoes, kale and sausage called Boerenkool Stamppot. My dad says that his Dutch neighbour always serves it with a side of vinegar. So you could try it the Dutch way or try it with cabbage the Irish way, but do try it!

Colcannon
We serve this with lots of veggies and nitrate-free organic turkey sausage or a veggie burger patty on the side. Some recipes for Colcannon call for diced ham in with the mash. How will you eat it?

1. Bring a large pot of water to boil. Add 1/2 tsp salt.
2. Cut potatoes in half and each half into thirds. Add to boiling water with garlic. Return to boil, then reduce heat and simmer for 10 minutes. Test potatoes, they should pierce with fork but shouldn't be too soft. If too firm, cook a few more minutes.
3. Add chopped kale and cook for 3 more minutes.
4. Drain water from potatoes and kale with strainer and return to pot. Add butter and warmed milk. Mash well with potato masher, adding salt and pepper to taste.