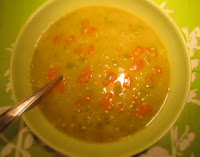 Apparently this Mother Goose rhyme takes its origins from a Split Pea porridge, or thick pudding, that was traditionally made in England with water, salt, spice and usually with bacon or ham.

Split peas are part of the legume, or pulse, family. Other members of this family include lentils and chickpeas. Apparently legumes have more protein than beans and are easier to digest. One half-cup of split peas or lentils contains more than 10 grams of fiber- more fiber than either vegetables or grains.


Split peas are also more convenient than most beans because they don't need to be pre-soaked and can be cooked in about an hour.

I love this basic Split Pea Soup, perhaps a close relative of pease porridge, but I am sure I wouldn't have liked it nine days old. Luckily, it never lasts that long in our house.

Split Pea Soup
This makes enough for about 4-6 people and it freezes well so make a big batch!
We like to serve this with rye bread, cheese and pickles. Add some diced ham or crumbled bacon for the carnivores.

1. Saute onions in oil in a large soup pot over medium-high heat. Cook for approximately 3 minutes, stirring often, until lightly browned and softened.
2. Add carrots and celery and cook for another 3 minutes. Add garlic, bay leaf and thyme and cook for about another minute.
3. Add peas and broth and bring to a boil. Reduce heat and simmer for about one hour, stirring every 10-15 minutes. Season with salt and pepper if needed.