Drinkable Yogurt: Without a dose of hormones! 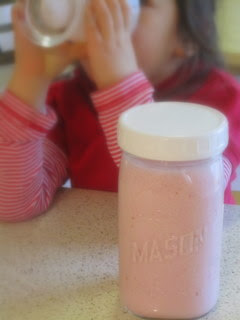 I don't like milk. And I don't know why. I love other dairy products- yogurt, cheese and ice cream are some of my favourites- but there is something about milk that I just don't like.

I like drinkable yogurt and so do the kids. I thought it was a great way to get extra calcium and other nutrients into them. But then I looked at the label.

I noticed that the Canadian product said that it was "imported". I called the company because I wanted to know where the milk was imported from. The Canadian company was less than helpful when I asked if that milk contained rBGH. Also known as bovine growth hormone, it a hormone injection that is allowed to be given to cows in the U.S. to increase size and milk prouction. It is banned in Canada because it failed to meet our animal safety standards. The Canadian yogurt company said that their yogurt could potentially contain rBGH because they buy from a pool of American dairy farmers.

I couldn't believe it- something that was banned for Canadian dairy cows, was actually allowed to be imported into Canada and served to children! I contacted Health Canada to see if this was actually allowed. Guess what? Your kid's drinkable yogurt (or other imported dairy products!) can contain milk treated with rBGH. Our Canadian farmers can't use it, but corporations can sell it in a packaged form. Crazy.

***Update: I called Danone today, because their new packaging no longer states "imported". They said that the DanActive used to be imported from the US (and re-labelled for the Canadian market) but has recently switched production to a Canadian plant. They use Canadian fresh milk but they do purchase American milk powder sometimes. So if your label says "milk powder" you may still be getting rBGH. Pay attention to your labels and call companies to complain if they are buying American milk products. (Think about your mac & cheese and other packaged foods!) Informed consumers can make a difference!
It was after that email (a few years ago now) that I decided that organic dairy was the only way to go from now on. My kids don't need growth hormones injected into their little growing bodies (or pesticides, for that matter). It also made me very aware of the importance of knowing where our food comes from.

Problem with this is that my kids still love the idea of drinkable yogurt and I haven't seen an organic version yet! So, I took matters into my own hands and started making our own drinkable yogurt.

Drinkable Yogurt
You could use almost any frozen berry for this. I would probably stick with strawberry or raspberry as the seeds are tiny. If you use blueberries, you might want to puree them and strain to get some of the seeds out. Last time I added some probiotics I had in the fridge that needed using up. I also like to supplement with some cold-pressed flax oil. Make sure you shake the contents well before pouring into small glasses.

1. Blend contents with hand blender or regular blender.
2. Store, covered, in large mason jar or mixing cup for up to 3 days.