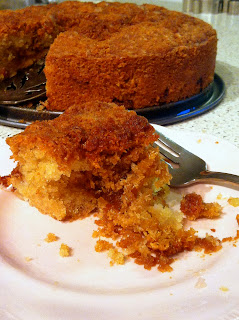 When I started this blog, I thought it would be a great place to store my favourite recipes online. I thought my mom and sister might read it. (Was right about my sister).

I've also met some nifty people because of this blog- both online and in person. I was referred to my current job because of a woman who ran across it. I have chatted endlessly with people who find out that I "blog" (a term that I don't really like since it sounds more impressive than it actually is!), and are interested in the same things I am interested in- local food, organic food, food security, food gardens, etc. And I get passed recipes and food samples often because people know I am a recipe collector hoarder.

I am always so happy to try recipes that come from people who also love recipes and cherish them as much as I do. They are the people, like me, who scribble notes in the margins of cookbooks, have recipe notecards lining their shelves and who have been fine tuning their favourite recipes over the years. This results in some fantastic finds!

All this to say that today's recipe comes from a woman named Cathy who reads the blog and shares my affinity for the blessed Rhubarb plant. (Click here for more great information on Rhubarb from farm made!)

She has shared several delectable recipes with me that I hope to pass along soon but this is one I made this week and the smell in the kitchen as this baked was delightful!

Here is what Cathy has to say about this recipe:
"This cake is a big wow! I can served it at fancy parties and pairs perfectly with a dessert wine and/or can be taken to the beach, bar b q's etc. If you only make one cake every Spring-this is the one to make.
Found this recipe way back in the 90's in a magazine and saved it for years. Last year I misplaced it somehow and couldn't find it on the internet or anywhere. I was "heartbroken" as I couldn't recreate from memory.A few months ago I was at a thrift store and found and bought the cookbook '"Inspirations-The Girls Who Dish" a selection from local woman chefs. I came home and much to my delight the recipe was in it! Chef Karen Barnaby had included it in her section- she knew the woman whose mother's recipe it had originally been."

Thank you Cathy for sharing! And thanks to everyone who I've connected with online and in real-life because of food, recipes and the shared love of being in the kitchen and cooking up some love in the form of a home-cooked dinner or a cookie in the lunchbox. You inspire me!

Cathy's Rhubarb Coconut Cake
I ended up changing this ever-so-slightly based on my bias against cinnamon in most situations (so I left it out, sorry Cathy!) and I used coconut milk that I had in the fridge to enhance the coconut flavour. She recommends using as much organic ingredients as you can find and I agree! 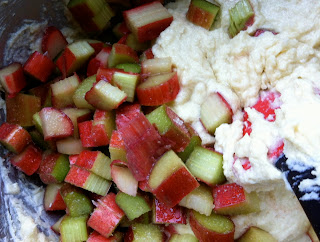 2. Macerate the rhubarb: sprinkle 2 tbsp of the granulated sugar on the rhubarb in a bowl and set aside while you prepare the rest of the cake-the longer it sits the better.
3. Topping: In a separate bowl mix the brown sugar, 1/4 cup butter, coconut and cinnamon by hand until chunky and well incorporated. Set aside.4. Whisk together flour and baking soda in a bowl. In a separate bowl, combine remaining granulated sugar and 1/2 cup butter. Beat with electric mixer until on med. high speed until light and fluffy. Add egg and buttermilk-mix on slow speed. Add the flour mixture and mix on slow speed until just incorporated. Fold in rhubarb and all the juice in the bowl. Mix in with rubber spatula.

5. Pour into prepared pan and sprinkle with brown sugar-coconut topping.
Bake for 40-50 min. or until toothpick inserted in centre comes out clean. {Sometimes the topping sinks a little during baking-this is o.k.}6. Cool on rack before cutting. Serve with creme fraiche, whipped cream, organic vanilla ice cream or yogurt.