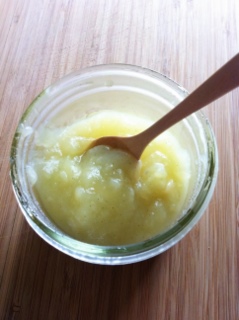 Apples and cinnamon. Cinnamon and apples. For some people there really is no other way.

I believe it was an article in Jeffrey Steingarten's book, The Man Who Ate Everything, that challenged this presumptive pairing for me.


It has been years since I read it, but I remember that he wrote something to the effect that cinnamon overpowers the apples and all you can really taste is cinnamon. He suggested a light vanilla flavour to highlight the apples.

Ever since reading that passage several years ago, I have made most apple recipes sans cinnamon and I believe Steingarten is entirely correct. There really is something special about highlighting the apple- and tasting the distinct sweet yet tart flavour contained within its flesh.

Here is a recipe that I just made with some apples from our very own little apple tree. The scabby apples weren't so great for fresh eating but made the most amazing applesauce. All thanks to Steingarten.

Notes:
If you really, really like cinnamon and want a delicious spiced applesauce, check out this recipe I stole from some friends on my other blog: http://adventuresingoinggreen.blogspot.com/2009/07/too-hot-to-handle.html
(And foodies will love Steingarten's book! http://www.amazon.ca/Man-Who-Ate-Everything/dp/0375702024) 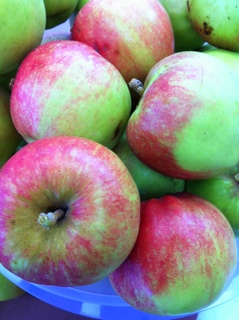 Again, not really a recipe but a method for making incredibly delicious applesauce- perfect for adding to cakes, muffins, pancakes or eating straight from the jar. I froze little containers of this to send to school. If you don't have vanilla beans, use a hearty glug of really good vanilla in its place.

apples, good cooking variety that doesn't tend to brown quickly (gala, granny smith, braeburn, etc.)
1/2 -1 vanilla pod (I used the one from my homemade vanilla container, so a little less pungent than some)
1/2 -1 lemon, juiced
sugar or honey, to taste (I use a combo) 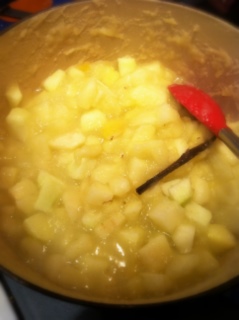 1. Peel and core apples and cut into chunks. Heat in a heavy, deep pot over medium heat, adding water to cover bottom of pot. I like to work as I go, so I get some nice saucy sauce and some chunkier bits, so I throw them in as it cooks. Slice vanilla pod and scrape out one side of the seeds to start. Add half the pod and seeds to the pot. Add juice of 1/2 a lemon. Stir often, adding more water as necessary.
2. Adjust lemon and vanilla as needed. A large pot might need an entire lemon and vanilla pod, a small pot just a little. Cook until the consistency that you desire, about 15- 20 minutes for my big pot from when I finished chopping.
3. Bottle and freeze or process in canner according to standard canning directions.