Chickweed and Wild Strawberries on the Farm 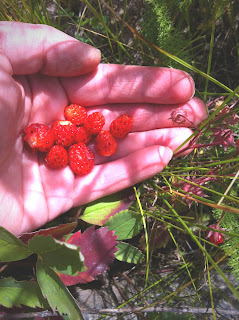 Going back to my parents' farm always leads to many fascinating discoveries- from what new art installation dad has placed by the front door (recently a chainsaw-carved bear appeared), to what pieces of art are being displayed in the kitchen (currently some rather depressingly-grey nautical images, circa 1800s). Where did the needlepoint quilt art go? And also scavenging in the basement to ensure that the toys we had as children weren't sold at an antique swap meet yet (found the Lite Brite!)

But this time also brought some rather exciting discoveries in the yard. After the mandatory llama head counts to make sure they are still alive and kicking (5 girls, 1 boy- check), we headed out to explore.

A little walk around the front revealed tons of food (that would have been otherwise classified as weeds by my lovely dad). He won't go to the bother of trying to kill weeds as he knows the ramifications. But he wasn't entirely pleased with the idea of eating weeds.

My first finds were tiny, jewel-like wild strawberries that had more concentrated flavour than I can put into mere words. Any description eludes me. Enough to say that when the kids saw my hard work (in a rather small cup), they decided to reward themselves with the tempting fruit of my labour. They greedily gobble up the precious berries.

Then I walked around to see huge patches of chickweed growing by the barn doors. My dad wondered what I was doing nibbling on weeds. I tried to get him to try them, but he refused. The kids tried it and we came back later to snip away with our scissors to trick grandpa into eating chickweed!

Here are some of the recipes that resulted from our wild foraging this week. I am hoping that some of these recipes encouraged my parents to eat a little more locally than they usually do...

I feel ashamed to even post a recipe for wild strawberries because they are so precious that you just want to eat them as you gather them! But I went foraging on my own and was able to gather a small cup of berries. Because there were so few of them, I whipped them into this delicious concoction to be able to share some of that deliciousness with the family. I added a touch of yogurt to add some tang. Double the recipe if you have lots of berries or have some fresh, local berries that you want to use instead!

1. Whip cream until nearly stiff in a medium-sized bowl. Add greek yogurt and icing sugar and combine until smooth.
2. Add as many wild strawberries as you can gather (I had less than 1 cup) and mix them into the cream mixture. Serve immediately.

Wild Strawberry Leaf Tea
Apparently wild strawberry leaves are very high in Vitamin C, so this is a great tonic!

1. Place a few strands of clean, wild strawberry leaves in a cup and pour boiling water over top. Let stand for several minutes before drinking.

Chickweed Pesto
Chickweed has a spinach-like flavour, so feel free to sub spinach or basil if you can't get your hands on some chickweed!

1. Place all ingredients in a blender or food processor and process until smooth.
2. Use as a topping for pasta, pizza or crostini topping. I like to use only part of this recipe on hot pasta and smooth it out with a touch of heavy cream. I reserve the rest for use at a later date (you can freeze it).