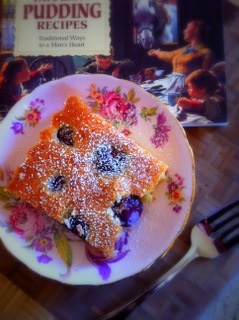 I ran across a recipe for Cherry Almond Pie in a British leaflet-style cookbook subtitled, "Traditional Ways to a Man's Heart".

I was intrigued. Not only by the very alluring title, but because this "pie" was in fact nothing like a pie. There was no crust and the filling was not very pie-like. It seemed rather a cross between a flan and a cake. I had to play with it a bit since it really had no clear quantities- stating to use "the weight of an egg" of butter and sugar and didn't give any size of pan to use.

Do not mistake this for a clafouti, the eggy French flan. This really is a heartier, cakier version of a flan- much like a frangipane tart but without the crust. Although I have my favourite Cherry- Almond Cake (see past posts), this has a completely different texture and is great if you are avoiding wheat or just want something different.

Anyways, after the experimenting, I was happy to have created a super simple, delicious cake (that happens to be gluten-free) for those precious last cherries. I decided that it needed to be called a frangipane flan instead of cake or tart but it is really like nothing I've had before. It almost defies a title. 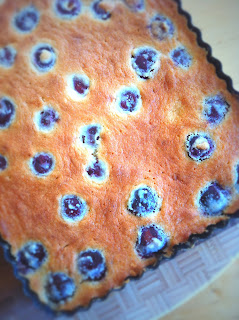 Cherry Frangipane Flan
You can use half flour and half almond flour for a different texture. It is best the day it is made. Dust with icing sugar or serve with a dallop of creme fraiche or whipped cream.

1. Preheat oven to 350 degrees. Butter a 8-9" flan or tart pan. Scatter cherries over pan.
2. Cream butter and sugar together in a bowl, add eggs and mix until light and fluffy. Beat in almond flour and almond extract. Spread over cherries evenly.
3. Bake for 25-30 minutes or until golden. The middle will still be soft but should be cooked through. Enjoy!