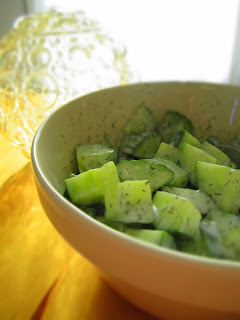 In the summer, my mom would make a cucumber dill salad with sour cream. So tangy and refreshing.

It was often accompanied by BBQs, suntans, and some 8 track music- probably something my sister and I hated and were embarrased to be listening to (that we now love).

How times change- BBQs are replaced with indoor grills (we now know the word carcinogen), suncreen is usually more visible than suntans (zinc oxide!), and the i-this and i-thats are the new juke boxes. And now I sometimes use yogurt in the salad instead of sour cream (we didn't know the word probiotics back then!) But somehow amidst all this change, Neil Young remains.

This super simple salad is really a staple in our home once the local greenhouse cucumbers come out to play! Once our own dill comes up in the garden, this might as well be known as Dill Salad with Cucumbers due to the amount of dill that we like to add.

Cucumber & Dill Yogurt Salad
This salad can be made with sour cream or yogurt, or a combo of both. The yogurt makes it quite tangy but we still love it! We are most happy when we can throw tons of our own fresh dill into the salad, but you can use dried dill if you can't get your hands on some nice fresh fronds. This recipe isn't an exact science, we throw everything in, taste and season.

1/2 cup greek yogurt or sour cream, or a little of both
3 tbsp white vinegar, or to taste
1-2 tbsp chopped fresh dill, or to taste (use less if you are using dried)
1/4 tsp sea salt
1 sliced or chopped Long English cucumber
optional: a little diced red onion, pinch of sugar if desired