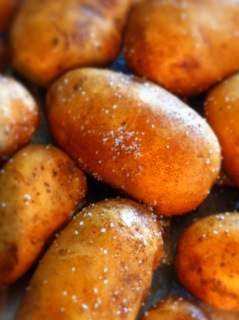 My friend recently wrote a column called, "Should Canadians be eating rice?" After my sister wrote a blog post about rice just before this came out, I was feeling particularly guilty.

Yes, rice is one of our family's favourite carbs to have with a meal but does it really work with our diet of trying to eat organically and locally whenever we can? Well, I can say with confidence that from now on our rice will be organically grown and from North America. But her article reminded me that, for our family, the best way to eat locally and support local farmers is to eat the humble potato! We can also find organic spuds in our area which makes it that much better.

Sometimes I find potatoes a bit boring and they usually take awhile to cook. I decided that I would bake up the whole bag of Russet potatoes at once- the first meal consisted of baked potatoes and the leftovers were used for quick potato skins a couple days later. Potato skins would be great as an appetizer, part of a meal or a light lunch with a big salad!

Who says that potato skins need cheese, green onions and bacon bits? I raided the fridge to use leftovers on the skins and they were amazing!  The lentils and preserved lemon were a particularly interesting offering. Use your imagination and use up your leftovers too!

Perfect Baked Russet Potatoes (or Jacket Potatoes)
These can be baked, as is, on the oven racks. Or, for a particularly tasty rendition, after you've washed the potatoes, sprinkle them with a touch of kosher salt and bake on a tray. No piercing, no foil, no fuss.

1. Preheat oven to 350 degrees.
2. Scrub potatoes.
3. Stick in oven. Around 30 minutes in, turn the potatoes over.
4. Bake for about 45 minutes to 1 hour, or until it is tender when pierced with a fork. Put leftovers into fridge to make skins another day! 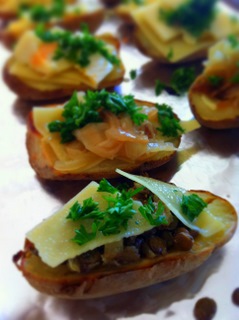 Potato Skins
Really use whatever is in your fridge (feta cheese? herbs? tuna? chicken? corn?), the following are some of the things I had kicking around. Cheese is usually a good component to keep the fillings on but it is not required. Most of these are enhanced with a dallop of sour cream or plain greek yogurt.

1. Preheat oven to 450 degrees.
2. Halve russet baked potatoes and scoop out just a tiny bit of potato out of the middle.
3. Brush top with olive oil and bake for 15 minutes until hot and beginning to crisp on edges.
4. Turn on broiler. Add fillings and broil for about 3-5 minutes.