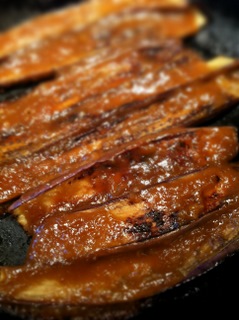 My family loves Asian food. This could be a rather obvious fact if you know that our family is a Chinese-Caucasian combo. The rather interesting fact is that they love Japanese food most of all- even though there doesn't seem to be any Japanese ancestry in the mix.

Because of this love, we eat Japanese food often. Mostly at restaurants and once in awhile I will try to make the family happy by making something pseudo-Asian at home.

I say psuedo because my recipes aren't typical Chinese or Japanese recipes. I like to adapt the recipes to make them vegan or vegetarian and I often don't have all the special ingredients needed to make the traditional dishes- like sake, mirin or pork floss (my husband insists that this exists!)

This was exactly the case this week when I picked up some thin, organic Japanese eggplants and all I could do was dream of the miso-glazed eggplant we used to have at a sushi place in Vancouver. I researched some recipes but I didn't have mirin and I didn't want to add an egg yolk to the mix. So I changed it up.

I really don't care for people who change recipes so much (and then complain that they didn't like it!)- even though I do it all the time. But there are times when it is definitely okay- like when you preface it by saying: "This is not traditional", "I am no expert", or "Woohoo, look how my experiment that turned out!" but I am saying all of those things now.

Definitely not traditional, but a tasty dish nonetheless...

Most recipes seem to call for white miso paste but I had brown rice miso in the fridge...either will work. Japanese eggplants can vary in size considerably. If you have smaller ones, cut them in half lengthwise. Larger ones can also be used, but I'm more inclined to slice them diagonally into thin slices and make more of a stir-fry with the sauce.

1. Move oven rack to top third of oven. Preheat broiler.
2. Heat cast-iron pan over medium heat.
3. In small saucepan over high heat, whisk together boiling water, miso paste, brown sugar, soy sauce, sesame oil and ground ginger until smooth. Mix together cornstarch and water with fork in a small ramekin and add to miso sauce. Cook, stirring constantly until it thickens, about a minute or two. Do not let burn, reduce heat to medium if needed. Set aside. It should have a very thick gravy-like consistency.
4. Place eggplants cut side down on hot frying pan. Roast on pan for a few minutes until it begins to brown on edges. Turn and repeat on skin side until skin is beginning to blacken and flesh is softening.
5. Spoon miso paste over eggplant flesh and place under broiler for about a minute or so. Watch constantly, you want it to caramelize a bit- but do not let it burn!
6. Serve immediately with rice and tofu or edamame. A sliced cucumber salad tossed with sushi vinegar would be nice too.

*If you want to make a tofu-miso sauce stir-fry, cook the eggplant slices well (you may need a little oil) and then dilute the miso sauce with another few tablespoons of boiling water to make a thinner sauce. Add to the eggplant in the last few minutes.