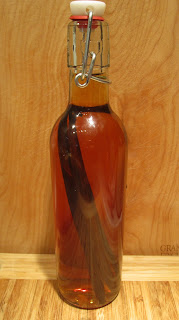 I am quite picky about what kind of vanilla I buy. I always knew the artificial vanilla seemed to leave a harsh after-taste, but when I read that artificial vanilla is entirely synthetic and can be made from byproducts of the pulp and paper industry or from petrochemicals, I decided that natural, organic vanilla was the only way to go.
This is not a cheap baking and cooking ingredient. Especially since I like to douse nearly everything sweet in a fair amount of the heavenly-scented liquid. I realized a little while ago that all my small bottles of organic vanilla were adding up.
Then I found this "vanilla-making kit" at a discount store. It came with a lovely bottle and dried organic vanilla beans. It had directions for making your own vanilla. So easy, why didn't I think of that? I was debating the merits of this kit, since I could do the same thing with a mason jar and my own beans. I ended up buying it because the vanilla beans inside looked nice, the bottle was a handy size and it was quite reasonable.
Then the dilemma, do I buy organic vodka or regular vodka for making it? I chose the (gulp, expensive) organic vodka since I was replacing my pure organic vanilla that is made with organic alcohol. I don't drink the stuff but thought it would be cheaper than the little bottles that I was always buying. I found out that you can refill the bottle with vodka because the vanilla beans continue to infuse the alcohol with flavour and colour for another use or two. Eventually they may start to loose their flavour but you can still extract a little more flavour from them by plunging them into a bag or container of sugar, and after a week or so, you will have vanilla-scented sugar!

The moral of the story is that you can make your own, pure vanilla with a few vanilla beans and some vodka. You don't have to choose organic vodka or vanilla beans as I did, but you do need some nice, plump vanilla beans at the very least (they shouldn't be so dried up that they look entirely lifeless). The beans aren't cheap but they will reward you with lots of wonderfully-scented vanilla. And if you love vanilla as I do, it will be a worthy investment.

1. Using a sharp knife, slice the vanilla beans in half lengthwise without going all the way through. Fold them outwards so the beans face out. Place in glass jar or bottle.
2. Pour vodka over top to cover. Set aside in a cupboard for at least a week. Check progress. Should be turning a lovely amber colour. Use when needed and refill with more vodka as needed.


You probably have plenty of recipes to use up your homemade vanilla, but may I suggest you try this one? 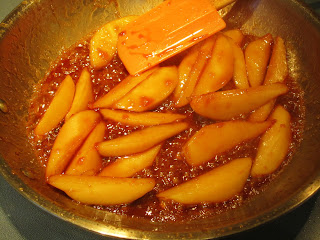 Caramelized Vanilla Pears
Serves 4
A ridiculously delicious dessert that can be made in five minutes. These wonderful pears must be served atop something creamy and delicious- maybe ice cream or greek yogurt?

1. In a heavy stainless frying pan, melt butter and sugar over medium to medium-high heat. As they come to a boil and start to thicken, add pears and cook for a few minutes until the pears are nearly transparent and the caramel is turning a dark golden brown (see pic).
2. As it gets sticky and looks like it is carmelizing rapidly, add water and stir, cooking for about 30 seconds or until smooth. Remove from heat and stir in vanilla. Serve immediately on ice cream or yogurt.