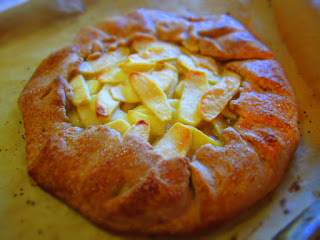 I hate pies. Ok, let me clarify: I like to eat pies, I hate to make pies. It is a stressful endeavor really.

First, you have to roll 2 perfectly round pie crusts, and make them approximately the same size. You then have to place said crust gingerly into a pie plate, fill with fruit or what-have-you, and then top with another perfectly rolled crust. Next, you have to maneuver the top crust under the bottom crust at the edges without breaking it. To top it all off, you then need to decide if you will crimp, fork, flute or braid the edges. Or, if you are feeling particularly ambitious, you may decide to make a lattice top. Then you have to cut steam vents. And if you haven't had enough (maybe you are feeling on top of your game at this point), you may feel the need to add embellishments- the dreaded decorative cut-outs.

After all this, it seems an excercise in futility because who really likes the crust anyways? Isn't it all about the fruit?

This is what I make when I feel the need to make a pie but don't want the stress of a two-cruster. I call it the un-pie but the fancy name is galette. It means a free-form, open top pie. I think that this rustic, simple pie is most beautiful when you put the least amount of thought into its appearance.

Apple Galette
You can make the crust a day, or a few hours, ahead of time. Keep in the fridge until you are literally ready to roll. You may wonder where the cinnamon is, but I prefer the pure, true taste of apples- not hidden by overpowering cinnamon and just highlighted with a touch of real vanilla.

Crust:I made this crust with spelt but it can be easily substituted with unbleached flour or a combo of unbleached and whole wheat. I usually have unsalted butter and add 1/4 tsp of salt, but today I just used regular butter and no salt and it was fine. Crusts are so much easier to do in a food processor. If you don't have one, rub the butter in with your hands quickly until fine crumbs form.
1 1/4 cups spelt flour or unbleached flour
1/2 cup butter, cut into small cubes
1 tbsp sugar
4-5 T ice water

Filling:If you happen to use an apple that discolours quickly, you can add a tablespoon of lemon juice to the apples in the bowl. If you don't have real vanilla, just stick with lemon juice. Artifical vanilla leaves an off after-taste.
3 apples (I like jonagold- they don't discolour), peeled and thinly sliced
1/4 cup cane sugar
2 tsp real vanilla (no artificial flavourings, please!)
1-2 tbsp cream
1 tbsp butter, cut into small pieces
1 tbsp sugar (I like to use turbinado or a coarse sugar)

1. Preheat oven to 425 degrees.
2. Roll out crust on flour-dusted surface until it is roughly a 12" circle. Move it around as you roll so it doesn't stick. No need to be neat.
3. Toss together apples, sugar and vanilla in medium-sized bowl.
4. Place crust onto parchment-lined baking sheet (it will overhang on the sides). Place filling on top of crust and spread out leaving a 2" border.
5. Begin folding edges in, a few inches at a time, folding corners over on each other, pressing down firmly as you go.
6. Place small pieces of butter over top of apple filling. Brush crust with cream and sprinkle crust with remaining 1 tablespoon of sugar.
7. Bake in middle of oven at 425 degrees for 20 minutes. Then reduce heat to 375 degrees and bake for another 15-20 minutes until filling is cooked and crust is golden brown.