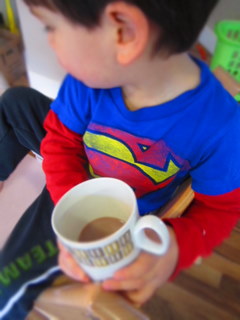 For most of my life I knew hot chocolate as something that came out of a tin with a flower on it. You mixed it with water. It was full of ingredients that I couldn't pronounce- mono and di-glycerides? dipotassium phosphate? silicon dioxide? Not to mention other nasties like hydrogenated oils, corn syrup and modified milk ingredients.

I know some people crave convenience over anything else but this is where I put my foot down. Milk and cocoa aren't even in the top ingredients in this "hot chocolate mix"! Sugar, corn syrup and hydrogenated oils top the ingredient list. Where are the milk and cocoa? (Hint: look further down the list!)

Cocoa in its purest form is really a health food. A study at Cornell University found that cocoa had more antioxidants per cup than either tea or red wine. Apparently heating the cocoa released even more of those disease-fighting compounds.

I, too, like things that are convenient but I prefer to find ways to make things convenient instead of always buying "convenience". My "instant" cocoa can be made in a minute or two. This version is healthier and tastes better than those packaged varities. You may never go back.

(Please note: This is called Hot Cocoa because it contains cocoa, and it is quick and convenient. If you desire a real "hot chocolate", add grated pure chocolate into milk warming in a saucepan).

Real Hot Cocoa
Get your hands on some good organic cocoa or another dark, dutch-processed, cocoa. My pick is always Cocoa Camino. You may find that you like more cocoa or more sugar than I use, after some trial you will find the ratio that works for you. Don't skip mixing the cocoa into boiling water, as it makes it "bloom"- intensifying the flavour of the cocoa. Agave syrup also works well as a sweetener here.

1. In a mug, combine cocoa, sugar and boiling water. Mix thoroughly until no lumps remain.
2. Add hot milk, or add cold milk and microwave mug for approximately one minute. Stir and sip away!