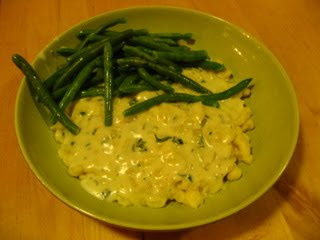 Christmas has a way of making me recreate many recipes that my mom makes for special occassions to share with my own family. Spaetzel is one of those comfort foods.

Spaetzel is beginning to become less of a "special occassion" food as I realize how easy it is to make and how it is so nice to have a last minute, no-food-in-the-house meal idea. It is simple and it is meant to be- for most people I am sure it is a carrier for sauces, soup stock or whatever your imagination can create. My parents love it in a clear soup base (made from chicken or turkey) with a little veg and parsley. I find that my kids love it at its most simple- drizzled with a little olive oil or butter with a large helping of veggies on the side! 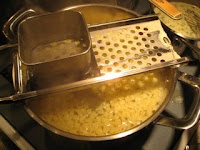 I think if you decide to make this, you would be best off buying a spaetzel maker at a kitchen shop- you will use it often. The maker looks like a grater that rests of the pot of boiling water with a box hopper on the other side, into which you drop the dough mixture and grate vigorously. As an alternative, I have also seen the wet dough dropped onto a cutting board this is held above boiling water, slicing the dough off into the boiling water with quick, thin cuts pushing the (typically longer and thinner) noodles in 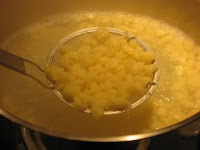 to the water below.


Here is my take on my mother's spaetzel, just a few alterations in measurement and a little milk and nutmeg to add some richness to the dough. A fine sprinkling of parsley into the dough also looks amazing.


I'm very curious about some variations I've recently read about- including adding grated apple to the dough and serving it with butter, sugar and cinnamon. That could be a taste adventure! 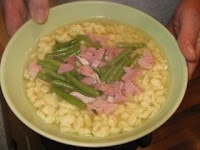 
1. Bring large, deep pot of water to boil. Add 1/2-1 tsp of salt. Set aside a strainer above a deep bowl.
2. Mix eggs, water and milk together in medium-sized bowl.
3. Whisk together flour, salt and nutmeg in large bowl.
4. Combine egg mixture and flour mixture and mix only until blended (should still be slightly lumpy).
5. Scoop 1 cup of wet dough into spaetzel hopper and grate vigourously into boiling water.
6. Boil for approximately 2-3 minutes, remove with slotted spoon to waiting strainer and repeat with remaining dough until you have cooked it all.
7. Serve with clear soup stock, warmed butter or sauce of your choice.
* My favourite sauce combines butter-sauteed onions, veggie or mushroom broth, some cream and parsley.